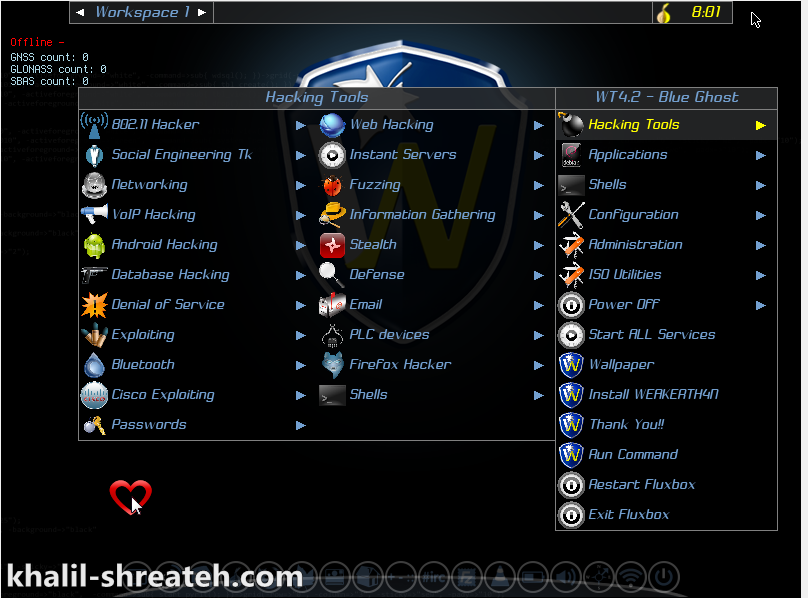 Please note: This version of Linux is geared towards NVIDIA based systems. It will still work out of the box without, but for best results (CUDA, Aircrack-NG-CUDA, Pyrit, Moscrack, VLC) test this live DVD on an NVIDIA-based system.

o   Kernel 3.7 dropped for no wireless-compat support (yet) and several wifi driver issues with kernel modules

o   LORCON and it’s dependent applications may be dropped, as most are old.re-added

o   Kernel 3.6 with compat-wireless and patched wifi drivers seems like most likely candidate

o   Kernel headers + image + sauce are all .deb files and will be hosted here.

o   Airstop-ng – to stop all services for specified device

GPSD decided to change my BU353 into SiRF mode and RO

o   GPSCTL will not change the device to NMEA ? (Failing and reporting that it is 4800 Baud SiRF)

o   Used Windows – SiRFDemo application and chose “Initialize data Source” from the Action menu, then Synchronize Protocol and Baud Rate (which set the baud rate wrong, but I saw the Debug View window display data. Then I chose “Swicth to NMEA Mode” and chose 4800 Baud. – Which “unbricked” the device.

o   Tested kernel for live system on several hardware mixtures, all worked well, NVIDIA based and not NVIDIA based

o   Added Hashcat GUI and tools into the menu

o   Listened to Built to Spill

o   Recompiled the kernel (Blue Ghost v1.5 – built from 3.8.X), kernel headers, sources – and made deb packages of each

o   Resolved (most) of the dpkg DB issues

Use any VM software .. i suggest you to use Oracle VM VirtualBox .

Advance Thanks For Liking and Sharing This Article